I am a first generation Isuzu Trooper specialist. Living on top of a mountain in the Ozarks miles from pavement I found the first gen Trooper to be the most cost effective way to maintain a roadworthy vehicle that can handle the challenges presented to me and my family  year round. I provide a resource for Isuzu Trooper owners worldwide through technical "shadetree mechanic" videos and I maintain a continuously revolving collection of first generation Isuzu Troopers that are being disassembled and inventoried for parts as well as preserved and protected for future restorations and custom builds. I ship parts for first generation Troopers world wide and take emails and phone calls to help with technical issues around the clock.

As these Troopers age finding used replacement parts has become quite challenging and I am addressing that challenge by overhauling, rebuilding and refurbishing original equipment such as engines, transmissions, differentials, interior components, gauges, etc.

As part of my service I make several long distance excursions around the continental United States, Mexico and Canada annually to deliver and install parts as well as collect Troopers that are otherwise destined for the scrap yard. I am continuously researching and developing ways to improve on the original designs to simplify and increase durability and reliability as well as ways to address issues that have arisen from aged or obsolete and impossible to find or cost prohibitive parts.

I do on occasion take possession of Troopers that still have more life to live and I do refurbish a few of these a year and sell them to the public. I also take orders and do restorations and"Custom Builds".

I take pride in my personal connection with Trooper owners all over the globe and look forward to meeting you, so please send me an email, I'd love to hear from you. Whatever you first generation Trooper needs may be you're in the right place.

What is an Isuzu Trooper 1st Gen:

Why don't we look at Wikipedia?

The first-generation Bighorn was available as a three- or five-door wagon with independent front suspension. In the Japanese market, the car was originally introduced as the "Isuzu Rodeo Bighorn", but the "Rodeo" part of the name was soon dropped. Early engines included a 2.0-liter gasoline and a 73 PS (54 kW) 2.2-liter diesel, lightly powered even by early 1980s standards for the vehicle's 3,700 lb (1,680 kg) empty weight. The four-wheel-drive system was engaged by operating a three-position shifter adjacent to the transmission shifter. Both Aisin manual-locking and Isuzu's own auto-locking hubs were employed.

In 1986, Isuzu introduced the 4ZD1 four-cylinder 112 PS (82 kW; 110 hp) 2.3-liter petrol engine. Apart from higher power, changes to the previous engine included a Kevlar timing belt replacing the previous chain, and a larger two-barrel carburetor. This engine eventually proved somewhat problematic with a high incidence of burned valves due to poor coolant flow design of the overhead cam/valve head with mechanical lifters.[citation needed] A later head casting improvement by an Italian firm corrected this problem through improved coolant flow. Also available only for 1986 in the US was the 87 PS (64 kW) 2.2-liter C223T turbocharged diesel engine, using a Garrett turbocharger. It was not a popular option because of the low power generated, and furthermore is notorious for a weak bottom end, the connecting rods not originally designed for the increased thermal and mechanical stress of forced induction. Because of those problems, Isuzu changed the 4ZE1 for 1988 and used the standard 2.8-liter GM V6 for 1989 until their own new V6 engines could be manufactured. 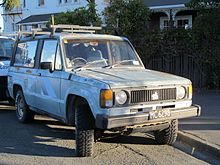 In 1987, the rectangular headlights were introduced. For 1988, Isuzu introduced a 120 hp (89 kW) 2.6-liter (4ZE1) I-TEC fuel-injected engine for the US market. In 1989, an optional General Motors 2.8-liter pushrod V6 borrowed from the Chevrolet S-10 pickup was also available. Later first-generation models offered an optional four-speed automatic transmission. Models from 1988 to 1991 were equipped with live rear axles and four-wheel disc brakes.

Overseas model engines included the Isuzu C223 (2238 cc), C223T (a turbocharged version of the same) and in the late 80s naturally aspirated and turbocharged 2.8-liter 4JB1 diesel versions, all straight-four engines. The turbocharged 2.8-liter originally produced 95 PS (70 kW), not much more than the 87 PS (64 kW) of the considerably smaller C223T due to new stricter emissions standards. Later versions with intercoolers fitted offered as much as 115 PS (85 kW).[1]

In 1989 only, a short-wheelbase (90-inch) Isuzu Trooper was imported to the US market as the Trooper. All of these short wheelbase Troopers were equipped with 2.6-liter fuel-injected inline-four engines, 4.77:1 differential gears and 15×7-inch aluminium alloy "snowflake" pattern wheels. Automatic and manual transmissions were offered.

The Trooper was also sold in Australia and New Zealand as the Holden Jackaroo, named after an Australian slang term for a young man working on a sheep or cattle station. The standard Trooper was also sold under the Isuzu nameplate in New Zealand only. In Indonesia, where it was locally assembled by Garmak Motors, it was sold as the Chevrolet Trooper. Around 1987 a two-wheel-drive version called the Chevrolet Stallion was developed there; it has the Trooper's body on the chassis of a rear-wheel-drive Chevrolet LUV. It also has a rigid front axle instead of the Trooper's independent design. There was also a locally developed SUV model of the Isuzu Pickups built in the early 1980s called the Holden Lincah and Holden Raider. While similar to a Trooper in many ways it was a simpler vehicle and has bodywork partially made of fibreglass.

In 1988 SsangYong Motors started licensed production of the Isuzu Trooper and sold it as the Korando Family.[2] It was only marketed in South Korea, Scandinavia, Southeast Asia and to a lesser degree South America. It used the same 2.2-liter diesel engine but later versions used both the 2.3-liter Mercedes-Benz turbodiesel engine and the natural aspirated Peugeot 2.5-liter diesel engine.